Some time ago I have received an offer from Packt Publishing to write a review of their new small book about AngularJS framework “Instant AngularJS Starter”. And because I still consider myself as a AngularJS beginner, I decided to give it a go. 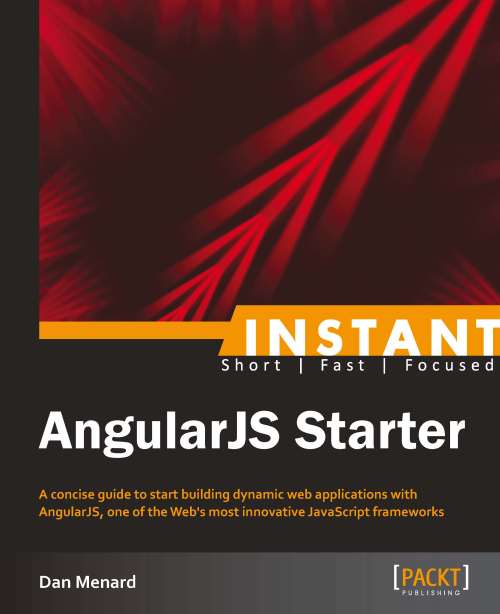 Book is indeed very short and concise, but still worth reading. It contains four main chapters, two short: one about AngularJS in general and second one with places about this library that are worth visiting and people on the Web that often publish something interesting and valuable on this topic. Luckily two remaning chapters are longer and contain the most interesting part of material covered in this book.

First large chapter guides us through a simple web application using Angular, starting from the scratch and then describing all its features and how they are implemented. It is a well formed and thought out step by step tutorial introducing newbies to the most important and most often used features of the library. And even if you have some experience with it, you will find something new and useful there.

Second large section is about top five features of AngularJS that make it special and so easy to use. There are some stuff about the most frequently used directives and annotations, detailed description of dependency injection and its internals, modules and how application could be modularised. And the last part is about writing custom, reusable directives. For me that was the most informative part of this book.

So to sum up, I can suggest “Instant AngularJS Starter” to everyone starting their adventure with AngularJS and also for developers that have some experience with this library. In my opinion it is well structured and allows much easier start that online documentation available on the official site. From the other side, definitely it is not a best choice for those using Angular extensively for a year or so, as I think they won’t find anything new inside.

With my experience lasting only a few months, I have found many useful stuff, I have learnt about less known directives: ng-pluralize, ng-cloak or ng-init to name only a few. There were also a very interesting explanation what are differences between service, factory and provider methods and in which cases they should be used.

On the other hand I was really missing one subject: testing. Definitely this is the area that strongly distinguishes AngularJS from other libraries and frameworks and in my opinion it should be covered in every, even short, book about this library.

But in spite of that, I was really happy to read this book and my knowledge about Angular increased significantly after finishing it. Some thing were new and some were shifted to a correct locations in my head.