Notes, thoughts and comments after my first agile conference in my career. Few interesting ideas, some already known approaches. Anyway, I do not regret being there.

I’ve just returned from my trip to Warsaw to attend 3rd edition of Agile By Example. 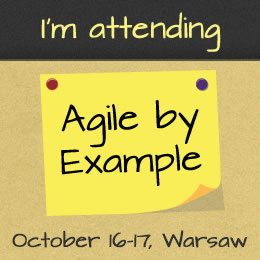 Here’s my thoughts, impression and notes after this event.

This year’s Agile By Example (or simply ABE) was my 2nd visit to this conference, I’ve missed only the first edition. Last year I felt really refreshed by the conference built not only around code, coding, testing and developing software. This edition was bigger and had more famous speakers, also venue was really much more impressive. Cinema (as everyone who attended Devoxx can confirm) is a great place to held any event of this type and Kino Praha was no different. Enormous screen, climatic rooms and cozy seats are things that really improve perception of the conference.

Presentation by one of the fathers of Scrum. Evangelistic, as expected, but too much about Scrum as a “silver bullet” that will solve all our problems, every time, everywhere.

Tomek Włodarek – Are we agile yet

Most entertaining presentation during first day. There were some “shits”, many laughs, but also many comments how we should be a craftsman in what we do. If you can attend any of Sandro’s talk, please do it or at least try to watch a video. It’s really worth it 🙂

Jurgen is a quality speaker and his performance during ABE confirmed that. Talks was about intrinsic motivators, driving a change and convincing people to do what we want. Overview can be read here.

Well prepared thoughts after five years of using Kanban in Paul’s company. What didn’t work, what they did about it and what were the results. Short stories from seasoned agile advocate.

Very interesting analogy between planning a family car trip and planning a release of a product/project.

This one is hard to judge as Michał, like me, is one of twenty CEOs in SoftwareMill 🙂 Code reviews are very important part of our development process and Michał told about experiences, problems and solutions that should help when introducing or struggling with code reviews in your organization.

Very interesting talk about introducing gamification to solve some problems in organisation. Lessons learnt during the process, examples what worked well, things that didn’t and  had to be changed along the way. Game written as a core of described gamification process is available online and also open sourced on GitHub.

Marek showed us office of this company where thanks to visualisation of many things (burn-down charts, organisation changes kanban board, etc.) they radically increased transparency and empowered agile climate in elPassion.

Tom Gilb – Agility is the Tool, not the Purpose

Tom is called a grand-father of Scrum as he introduced very similar concepts some time before Scrum was created. His talk was about how to by measuring impact of different project areas / functionalities / submodules on features/results we could analyze and pick with ones with highest effect and lowest cost. He showed rather complicated matrix from which company was able to choose on which area concentrate first. Concept is quite similar to impact mapping, but Tom’s approach is more rigid and number-based. And for me it looks as both advantage and drawback: numbers should give are pretty objective view on project but on the other side, they are taken from discussions with people, so they can also be incorrect and subjective as well. Nevertheless, I fell this approach can be quite successful for smaller groups of people and not very complicated feature/impact matrix.

Speaker and topic of this talks weren’t revealed earlier and many people stayed until the end of event to see what this surprise is about. And I think no one was dissapointed.

Most inspiring presentation of the conference. Iwona told us about introducing agile practices (stand-up meetings, pomodoro, agile manifesto) in here job which is not IT-related at all. She’s a scientist in a Lab conducting various biology researches.  She also presented a history about how she started a movement that forces Parlament in Poland to change wrong law that affects every scientist in our country (vote will take place in a few weeks, fingers crossed).

After first day of ABE 2013 I felt a little bit disappointed, there were no “wow” effect, I’ve made some notes but during breaks we shared similar thought with a few colleagues that maybe we are too agile-aware to learn anything new during this event. But then, 2nd day came by and everything changed. Topics were more interesting, talks more engaging and solutions more inspiring so at the end I can tell that even for someone who works in an agile environment for about 3 years it was well spent time. Some new stuff, some inspirations and of course, a great occasion to share and discuss our problems and approaches with people from different companies and with different experiences.

The Clean Coder, another great book from Robert C. Martin

Google Guava – almost everything you need to know